Chokos for Africa, or should that be South America?

Many of you will have no idea what I’m talking about. Especially any younger ones I suspect but while Mum never grew these, Nana had one take over her hen house. I remember Mum taking home buckets full and we had them swimming in white or cheese sauce after being boiled to a soppy pulp. No offence to Mums cooking. We loved them actually. That was how a white middle class woman cooked most of her vegetables on stove top fifty years ago. Most had never heard of stir fry or used much garlic let alone ginger with Asian sauces.

I read a book on hens and they suggested growing a choko over a run to provide shade and food. I managed to snaffle a couple from someone and plonked them both in a bucket before winter and popped the sprouted result of the one that survived under the fence line in Spring. You will hardly believe the ground it has covered as it has been going for Africa. Not only has covered almost half of the three bays of the run area, it is also growing and fruiting INSIDE the hen house and making its way over the other side. Lindy and I gazed at it in amazement one day and Lindy said, “I think you better nip that thing in the bud before it gets away on you”.

I had to agree as already one of the runs doors was sealed shut with growth and I hacked it back to the fence. It has covered that ground again and more, but now it has massive great chokos hanging from all over it. They are ten times the size of Nana’s which you could hold in the palm of your hand. Not sure if this is a different variety or the hens have provided a rich and fertile ground? If that’s the case I look forward to seeing what happens when I plant one of the beds out in Silver beet next week as I move them over to their next run, and then in Spring another in beans and Sweetcorn!

That’s an average sized granny smith apple there for perspective.

So now I am harvesting these massive globes I decided to experiment with cooking them. I peeled one and then with a peeler sliced thin whispy bits down the length and having just cooked bacon I dropped in some finely chopped garlic cloves and gave them a quick stir. OMG is all I can say about that. The texture is a bit like a mushroom perhaps or what? I don’t know exactly but it absorbed all that salty garlicky bacon taste and was amazing.

Next day was a curry in the crock pot. I chopped them up into sizeable chunks and I expected them to disintegrate but they held their shape pretty well, not collapsing like a potato does. Best of all it absorbed all the rich curry flavours and became something completely different and it padded the curry out well.

I decided I would try a soup, so having the Xmas ham bone waiting patiently in the freezer, I did a soup slow cooked again and it did become a little sloppier due to the longer cooking, but it once again absorbed the flavours and added to the bulk without detracting from the original.

Tonight I sliced it thinly on an angle and stir fried it in peanut oil and ginger before adding Bok choi and it was difficult to tell the bok choi stem from that. Held its shape. Took on the ginger and peanut oil with a hint of soy sauce and sesame oil added at the end. The other day I added it , juliened, raw to a salad and I think it works OK there too tho I wouldn’t add a lot, its a bit like cucumber. 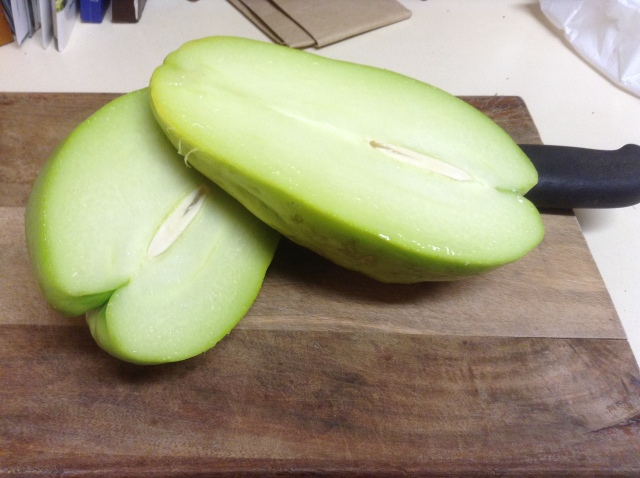 The only think I haven’t done is grate it and put it into fritters or a cake or in pickles but Im kindv’e thinking it would probably work there too. I just checked my Digby Law vegetable cookbook. If you like vegetables and can get your hands on any of this mans cookbooks from the eighties you will not regret it. He takes vegetables and gives you a heap of didfferent things you can do. I looked up Choko and I can believe it as he describes adding it to apple pies and fresh fruit salads, pickles and relishes among many other things.

It comes from South America and you can even eat the young leaves and roots. Im hooked. I think its so versatile, its a must have and wouldn’t hesitate to grow it annually. So..oooooo….Chokos anyone? I have a few extra I can spare.

This entry was posted in Uncategorized. Bookmark the permalink.